The technology of sewage treatment in Ukraine has not undergone significant changes in recent years. The result is significant contamination of natural reservoirs, in which wastewater is discharged. Thus, the water of the Dnipro River varies greatly according to the hydrochemical parameters in its various parts. According to its quality, the water can be classified from pure, in some small parts, to extremely dirty. This is due to the fact that there is a lot of uncontrolled wastewater, and the life of the treatment facilities often exceeds 50 years.

The processes of wastewater treatment are biochemical processes. Improvement of biological wastewater treatment is observed with an increase in the concentration of active sludge in aerotanks, as the specific load on active sludge is reduced. Increasing the concentration of sludge leads to an improvement in its metabolic properties and an increase in the aerosol oxidation capacity. Increasing the dose of silt in an aeration facility can be achieved by using neutral carriers to form fixed microflora on them. When using additional immobilized sludge placed on carriers, water purification is carried out by the following two groups of cenosis: active weighed sludge and sludge biofilm, attached to carriers.

For research purposes, a model installation of aerobic biological wastewater treatment has been created. The model installation is a one-stage aerotank mixer, which operates under continuous aeration in stationary mode, with a secondary settling tank.

Experiments were conducted under constant temperature − 20ºС. The sewage from the Cherkasy treatment facilities served as a nutrient medium. The first part of the research was conducted in the standard operating conditions of industrial aerotanks by active sludge biocenoses, which was in a suspended state. The second part of the research was carried out under conditions of sewage treatment by both biocenoses of active sludge, which was in a suspended state, and biofilm, attached to the carriers.

As a carrier of biofilm active sludge, we used pieces of biological plastic packaging of correct shape and a developed surface.

The effectiveness of the biological treatment process was controlled by the change in the waste and purified water of the following indicators: chemical oxygen demand (COD) and the pH.

The results obtained during the experiments are presented as graphic dependencies on Fig. 1 and Fig. 2. 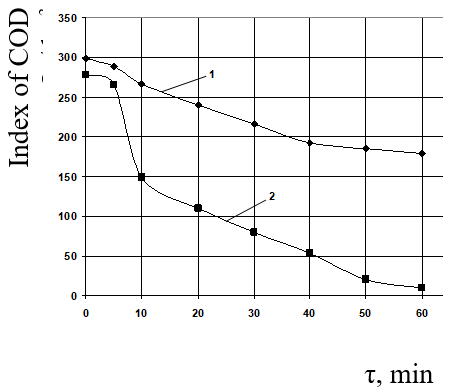 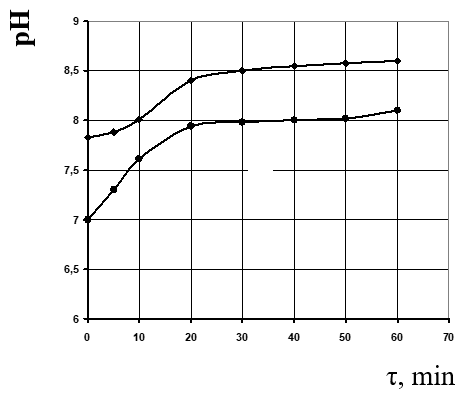 The character of the COD changes, represented by curves 1 and 2 in Fig. 1, clearly demonstrates the acceleration of biochemical oxidation processes when using biofilm carriers. For the same period of time, the degree of sewage treatment increases from 5 to 60 minutes of the process by 44-94%.

Fig. 2 shows the dynamics of pH changes in time of sewage solution during biological purification in aerotanks.

The figure shows that the pH of the sewage solution increases during the process of biochemical decomposition of pollutants. Such a change indicates the beginning of the process of biological decomposition of organic compounds. During the first 20 minutes, there is no significant difference in the pH change for different conditions of the process in aerotanks. Further, there is a more sharp increase in the pH value after the use of biofilm carriers in aerotanks. This indicates a higher rate of oxidative processes in aerotanks using biofilm carriers.

The use of biological film carriers in aerotanks will reduce the time of sewage treatment and take more sewage without changing its design.