Today the problem of energy supply is acute in the world, and its partial solution is fuel cells, the specific characteristics of which are greatly improved every year. One of the types of liquid fuel for fuel cells is formiates. Their synthesis is carried out chemically or electrochemically from derivatives of carbon dioxide (carbon dioxide and alkali and alkaline earth metal hydrocarbons).

The electrochemical selective reduction of CO2 to formate is possible on such catalytically active metals as mercury, lead, and tin, characterized by high overstrain hydrogen release. For the most part, the latter is used, due to its environmental and high selectivity.

The productivity of the process of formates electrosynthesis depends on such parameters as temperature, pressure, potential and morphology of the cathode surface, as well as the concentration of the solution components, the cation grade and the pH of the medium.

Actually the mechanism of electrochemical production of formiates according to various literary data is described by the following reactions:

According to the literary data, the mechanism of formiate electrosynthesis is controversial, which stimulated carrying out of these studies.

Electrosynthesis of sodium formate was carried out in a membrane cell under standard conditions on a flat polished tin electrode of 3.5 cm2 in the capacity of −1.7 V in a solution of 0.1 M NaHCO3 with constant bubbling of CO2 and with a feed rate of 4...5 ml/min. The formate was determined by permanga-nametometric titration.

As can be seen from Fig. 1, the dependence of the current output of formate sodium from the initial pH of the solution has an extreme nature. Comparison of the experimental data obtained with the diagram of the existence of carbon dioxide forms at different pH values (Fig. 2) gives an opportunity to explain the results obtained. 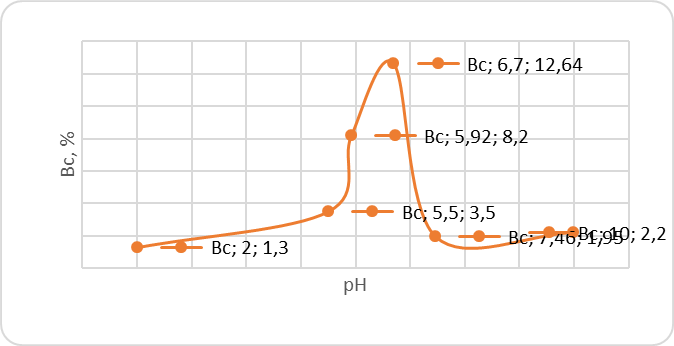 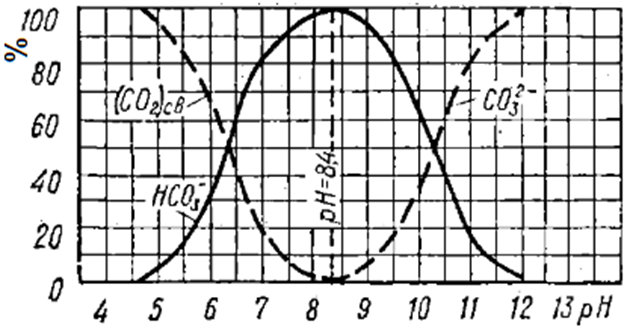 As can be seen from Fig. 1, 2, in experiments without CO2 bubbling, but in the presence of hydrocarbonates (pH 10), and in the strongly acidic environment when the content of molecular CO2 is the maximum, but the impossibility of the existence of hydrocarbons, the current output of sodium formate is minimal. At pH 6,3...6,4, which corresponds to the equivalent content of free carbon dioxide and bicarbonate (Fig. 2), the current output of NaHCOO is maximum and is 12.6%. This may indicate that the maximum current output of the formate is achieved only in the case when both the hydrocarbonate and CO2 in the molecular form are involved simultaneously in the reaction − reaction (3).