It was established that all samples are β-Ni(OH)2 by PXRD, TG, DSC methods. To confirm the formation of nickel hydroxide directly during the synthesis and to determine the gray substance, which was formed, a twice longer anhydrous synthesis (20x30 sec) and double alkali synthesis (with double amount of NaOH) have been carried out. Part of the reaction mixture after twice longer anhydrous synthesis was not rinsed neither ethanol solution nor water. Both samples (with rinsing and without rinsing) have been investigated. It was shown the pattern of the nickel hydroxide with high crystallinity (Fig. 4 A). This is strong evidenceof the nickel hydroxide formation as a result of solid state mechanochemical reaction before rinsing. Also it was found patterns of new substances 4Ni(OH)2·NiOOH, i.e. semi-oxidized hydroxide-oxyhydroxide. Well known, that NiOOH has a dark brown color, that’s why some amount of 4Ni(OH)2·NiOOH can change sample’s color to grey. After rinsing, crystallinity of the sample decreased and structure, similar to that previously reported in literature for βbc-Ni(OH)2 (bc – badly crystalline) was obtained. Worth noting, this structural feature was claimed to yield higher electrochemical activity. The diffraction peaks showed the presence of crystallographic stacking faults or interstratified alpha-beta phase domains. It was hypothesized that during twice longer anhydrous synthesis Ni(OH)2 particles with some thickness layer of 4Ni(OH)2·NiOOH and high activity have been obtained. During rinsing by boric acid ethanol solution 4Ni(OH)2·NiOOH could react with ethanol. As a result, the crystallinity of existing particles of nickel hydroxide was decreased, and new particles with more amorphous structure βbc-Ni(OH)2 were formed. Sample, obtained by double alkali synthesis (fig. 1 C), has high crystallinity and include also sodium nickelate (III) NaNiO2.

The direct formation of Ni(OH)2 during of mechanochemical synthesis and obtaining of 4Ni(OH)2·NiOOH and NaNiO2 was proved with PXRD. 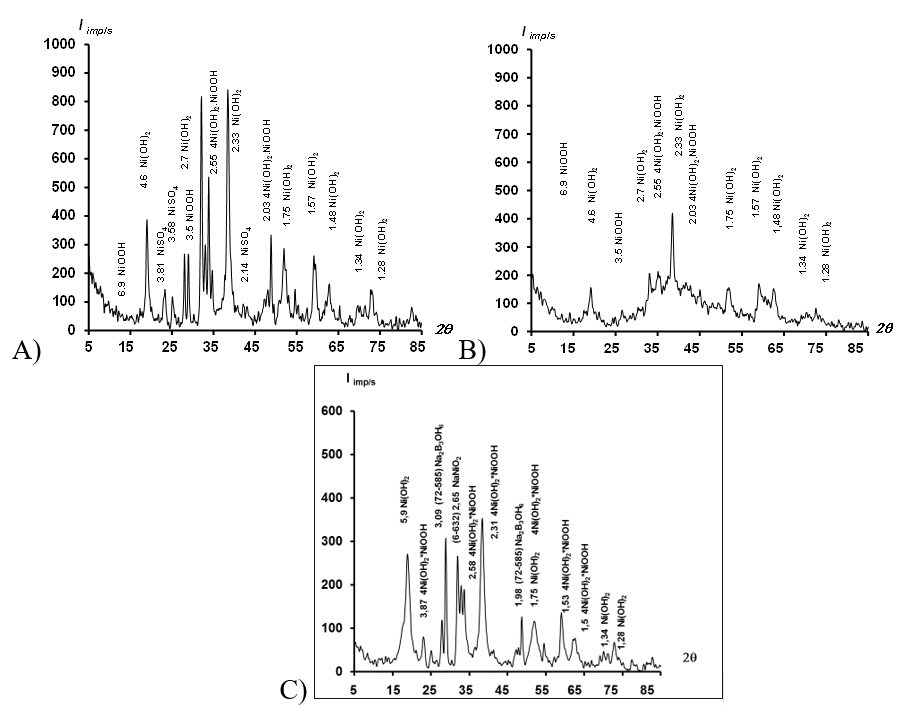