The modern vector of development of countries is the use of technologies that reduce energy consumption through the introduction of special algorithms. One of these types is the use of so-called "smart Windows", which allow to save electrical energy for air conditioning up to 49%, reduce the load on electrical networks in "peak" periods by 16%, as well as reduce lighting costs by 51%. "Smart Windows", implemented on the basis of special systems that they use can provide variable lighting by changing the light transmission.

Electrochemical electrochromic materials (for example nickel hydroxide) do not require constant consumption of electricity - only at the time of change in the optical state, and they are much cheaper than liquid crystal and suspended particle systems.

The main aim of this investigation is to obtain transparent homogeneous Ni(OH)2 films with high specific characteristics for electrochromic devices. To achieve this aim the following goals could be solved:

1. To carry out the electrodeposition process on the FTO glass with different templates (PVA, PVB) and without them.

2. To investigate the properties, especcially optic, of the obtained films.

It was proposed to apply a composite material based on Ni(OH)2 and polyvinyl alcohol (PVA) cathode template method with an aqueous solution. In this method, PVA was used as templates, which formed a matrix in solution and precipitated together with Ni(OH)2. This composite material showed high electrochromic characteristics. In this study, polyvinyl butyral (PVB) was used instead of PVA. A prerequisite for the use of PVB was the fact that the substance is used to form transparent films for optical devices, as well as for strong adhesion and bonding of glass. Since the latter does not dissolve in water, the solution for cathodic template deposition contained most of the ethyl alcohol and about 11% water.

− Cyclic voltammetry with parallel recording of changes in the transparency of the coating (CVA);

− Record changes in the transparency of the coating in the process of self-bleachening; 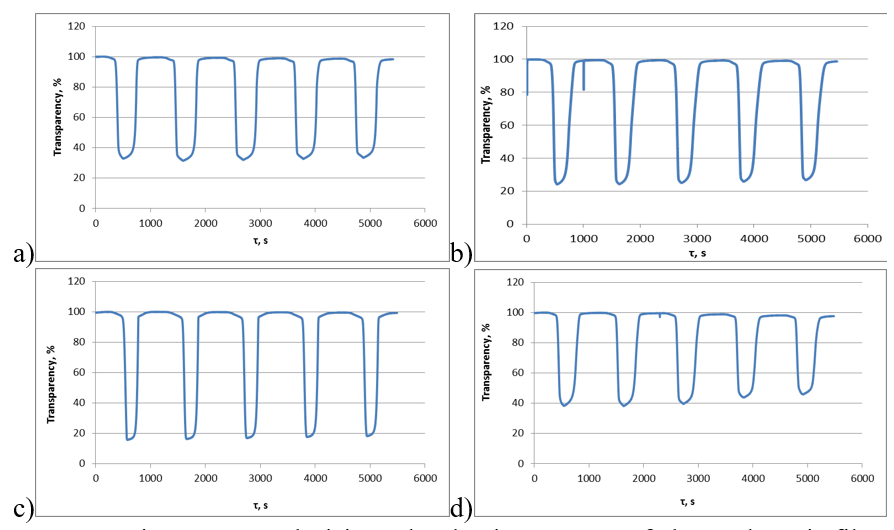 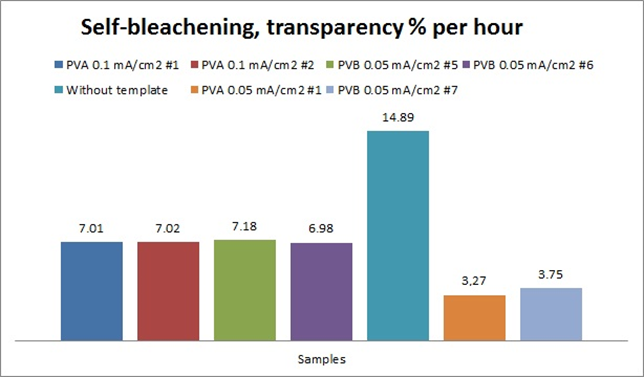 Conclusions: 1) during the deposition, a number of high quality films in a transparent state have been obtained; 2) by electrochemical studies together with the determination of electrochromic characteristics it has been shown high specific characteristics, high reversibility of the process of colorising-bleachening; 3) it was detected that the samples with PVB template is the best according to high adhesion to the surface, transparency and degree of colorising; 4) offered for the first time as template, polyvinylbutyral for deposition of electrochromic coatings occidentalia not soluble in water. This makes it possible to use the films obtained in the presence of PVB at high temperatures, which is important based on the possibility of strong heating in their sunlight.